We partner with groups like Seeding Sovereignty who, in their own words, share how they seek to disrupt colonized spaces through land, body, and food sovereignty work, community building, and cultural preservation.

Our collective has watched history repeat itself for a year across Turtle Island as Indigenous and other communities of color faced and continue to face catastrophic impacts brought on by the spread of Covid-19. Since March 2020, one in every 475 Native Americans has died from the virus and over 200,000 Indigenous peoples have lost their lives. The most recent deadliest month for Native communities was in December 2020, where death rates increased by 35 percent. This virulent pandemic came on the heels of one of the warmest years on record, with ceaseless climate catastrophes, including droughts that catalyzed unprecedented wildfires across the globe—quelched just in time for the novel coronavirus to set the world aflame. 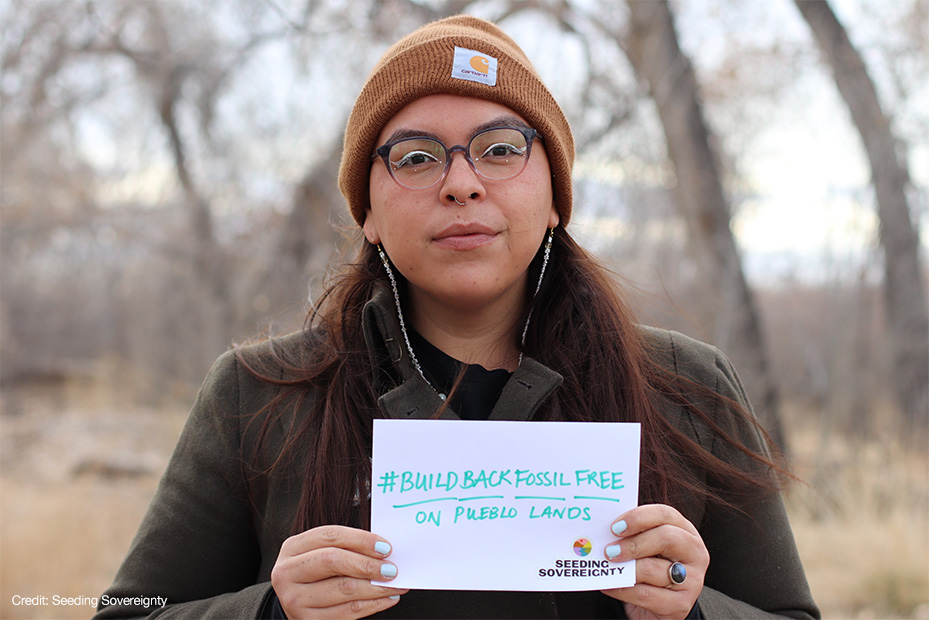 In states like New Mexico (NM), where natural water supplies are regularly diverted out of Indigenous communities into distant metropolitan areas, threats of environmental disaster have become even more alarming. Those of us most impacted by recent environmental changes are also the people on the frontlines of ever-escalating climate crises, protecting living forests, waterways, and sovereign territories, resisting extractive industries and other threats to their traditional homelands. While the majority of tribal nations in the state locked down their pueblos and reservations to protect Native populations, those that posed some of the highest threats to the well-being of Indigenous folks were deemed “essential workers” and allowed to continue moving through federally-regulated tribal land. Their sole purpose? Resource extraction.

Resource extraction is an integral facet of the oil and gas economy on stolen Apache, Pueblo, and Diné lands in so-called New Mexico and currently, there are over 4,000 active fracking wells and over 500 new drilling permits that have been approved by the Bureau of Land Management to continue natural resource exploitation on our territories. In what is now known as the Greater Chaco region (San Juan Basin), Indigenous communities who hold the land and sites within the region sacred have had their efforts to further safeguard them curtailed by a myriad of roadblocks. From past-presidential executive orders, inaction by current administrations who have been demanded by tribal nations to Build Back Fossil Free, and state commitments to an industry that are hell bent on committing violence against the land that begets violence against people of the earth, the fight to ensure a future for those living and those to come wages on.

Now is the time to double down on supporting Indigenous peoples who have a crucial role to play in ushering in a regenerative economy, redistributing wealth, and leading us away from climate catastrophe on a global scale.

In honoring our ongoing commitment to mutual aid, Seeding Sovereignty has invested in uplifting people of the global majority in need due to the pandemic, and has committed to working with fellow communities impacted during and beyond times of crisis by amplifying local leadership’s calls to action. In early April 2020, we launched the Indigenous Impact Rapid Response Initiative (phase one of our mutual aid programming) in partnership with Pueblo Action Alliance to respond to the physical and mental health, economic, and cultural needs of Indigenous partner communities in New Mexico. They also do on-the-ground work in so-called Flagstaff, Portland, in Oceti Sakowin territory, and in Lenapehoking (NYC). We’re nearing our one-year anniversary and have since transitioned through two phases of our community work and operate as the Indigenous Impact Community Care Initiative (now in phase three) working to:

As of March 2021, the Indigenous Impact Community Care Initiative has:

Charitable giving is at the heart of Lush’s business. We believe it's our responsibility to advocate for the environment, animals and people in need, as well as giving back to organizations locally and around the world through Charity Pot. Learn more about and support the work that Seeding Sovereignty does and learn how you can take action for the planet.