Resistance and Resurgence is a five-part article series authored by Indigenous journalists, thought leaders and activists. In it, we’ll explore the key historical and present-day issues impacting Indigenous communities across Turtle Island, make connections between the past harms and the need for action now, and share stories of resiliency that have gone unrecognized by mass media since time immemorial.

Resistance and Resurgence: Missing and Murdered Indigenous Women, Girls and Two Spirit Peoples was written by Co-Director Kahea Pacheco (Kanaka 'Ōiwi) and Research and Programs Intern Lisa Traynor from Women’s Earth Alliance, a 15-year global initiative that trains, resources and catalyzes grassroots women’s networks to protect our environment and build healthy, safe, and just communities now and into the future.

In recent months, both the U.S. and Canada have announced the allocation of resources dedicated to confronting the epidemic of Missing and Murdered Indigenous Women, Girls and Two Spirit Peoples (MMIWG2S). In the U.S., Interior Secretary Deb Haaland announced in April the creation of the Missing and Murdered Unit in the Bureau of Indian Affairs, and the Canadian government reportedly earmarked $180 million for programs to end and redress MMIWG2S following the June 2019 publication of the Final Report of the Canadian National Inquiry into MMIWG2S, which recognizes these human rights abuses as a genocide against Indigenous women, girls and Two Spirit peoples.

While this is an important step from governments, which at best condoned this genocide and at worst committed it, the process toward justice and healing has been slow and long overdue, despite generations of critical advocacy by Indigenous women, communities and organizations including fellow Lush partners Native Justice Coalition, No More Silence and Clan Mothers. And, as Women’s Earth Alliance’s own work has shown over the years, there can be no healing of the violence done to our communities when violence upon our lands and territories continues unabated. 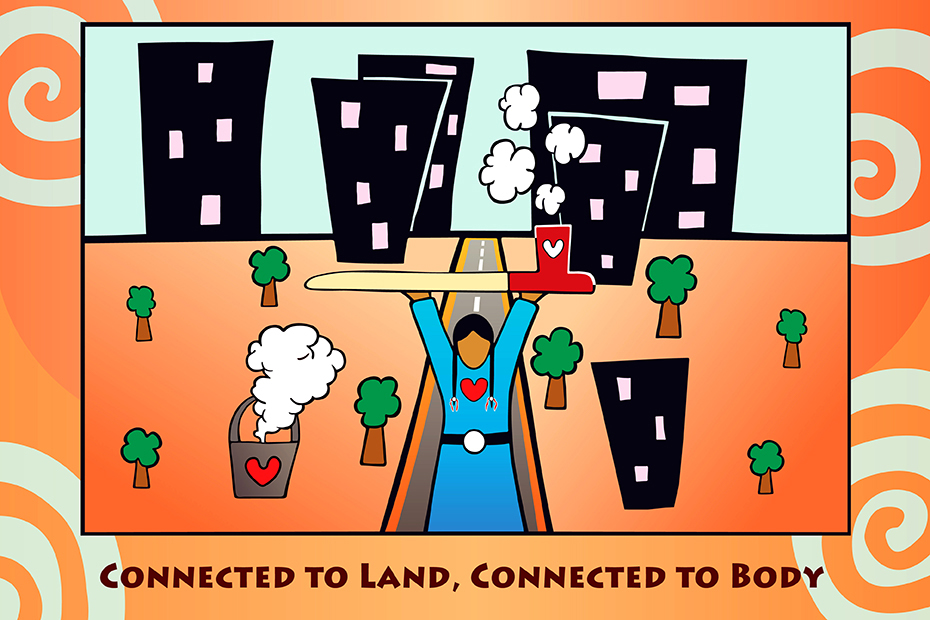 But data alone fails to explicitly place the dangers facing Indigenous communities as part of a larger system of ongoing colonization, injustice and historical trauma including land grabs, the forced sterilization of Indigenous women, the theft, abuse and murder of Indigenous children within residential schools, and more. These statistics alone don’t tell the story of how extractive industry, fueled by corporate and governmental greed, furthers colonial and patriarchal systems by eroding traditional Indigenous governance systems and the role of women and Two Spirit people in these communities.

As Audrey Huntley of No More Silence states, “We need to work harder to create safe and accessible spaces everywhere.”

In 2014, Women’s Earth Alliance and Native Youth Sexual Health Network began a multi-year initiative, Violence on the Land, Violence on our Bodies. It documents the ways that Indigenous women and young people’s safety and health are impacted by extractive industries and offers a community-based toolkit to support their leadership in resisting environmental violence in their communities. Through research and community interviews, the relationship between industry and MMIWG2S became clear:

[T]he introduction of industry into the areas surrounding Indigenous lands and communities has often meant an increase in population...These workers, many of whom are men from all over the country, are attracted by the jobs and large paychecks, and are housed in temporary accommodations typically referred to as “man camps.” With such a concentration of men, money, drugs, and isolation, the rates of sexual violence have risen in many of these industry-impacted communities. (Violence on the Land, Violence on our Bodies)

As part of this report, our team spoke to Indigenous rights advocate Melina Laboucan-Massimo (Lubicon Cree First Nation) about this land/body connection. “The industrial system of resource extraction in Canada is predicated on systems of power and domination,” she shared. “This system is based on the raping and pillaging of Mother Earth as well as violence against women. The two are inextricably linked. With the expansion of extractive industries, not only do we see desecration of the land, we see an increase in violence against women. Rampant sexual violence against women and a variety of social ills result from the influx of transient workers in and around workers’ camps.”

Furthermore, neither the proximity of Indigenous communities to industry nor the targeting of Indigenous women, girls and Two Spirit people is a coincidence. Rather, MMIWG2S is structural; it’s a part of the ongoing strategies of colonization which started 500 years ago. According to anti-colonial land defense organizer Iako’tsira:reh Amanda Lickers (Turtle Clan, Seneca), “The reason women [are] attacked is because women carry our clans and…by carrying our clans, are the ones that hold that land for the next generation. So if you destroy the women, you destroy the nations, and then you get access to the land.”

Where does real healing and justice begin?

“It is critical to create awareness of MMIWG2S and the direct relation to resource colonization. Our lands and bodies are still under attack. Colonization, settler colonialism, and genocide are still occurring. This violence harms the beautiful gender balance that has always existed in our communities. As we work diligently to reclaim who we are, we need support to counter the ongoing violence we face daily.” —Cecelia R. LaPointe, Native Justice Coalition

As of July 2020, there were 2,306 missing or murdered Indigenous women, girls and Two Spirit people in the U.S., and 2,000 missing and murdered relatives in Canada. These numbers make it heartbreakingly obvious that, despite the advocacy of Indigenous communities and leaders, MMIWG2S continue to be largely underreported and deprioritized in the mainstream media, government and law enforcement.

Advocates argue that, in addition to and as part of the ongoing practices of colonization, this is a result of a lack of comprehensive data due to limited law enforcement resources, poor record-keeping, and racial misclassifications. There’s also a long history of poor or non-existent communication between communities and law enforcement, with insufficient training of law enforcement fostering a lack of trust, victim-blaming and underreporting. The underrepresentation of Indigenous communities in government and law enforcement has also led to insufficient attention given to MMIWG2S, maintaining a long history of invisibilization and violation of Indigenous peoples and rights. And the prioritization of profits for extractive industry and governments over the safety and lives of Indigenous women, girls and Two Spirit people has perpetuated this ongoing genocide.

The final report of the Canadian National Inquiry into MMIWG2S presented 231 Calls for Justice directed at governments, institutions, social service providers, industries and all Canadians, which “must be no less monumental than the combination of systems and actions that has worked to maintain colonial violence for generations.” And while this year’s allocation of resources by Canada and the U.S. may be a step in the right direction, central to every path forward must be support for community-informed and Indigenous women-led reconciliation and healing. Healing centers, like those created by Clan Mothers, which center Indigenous women, girls and Two Spirit people, and which are grounded in care, sustainability, and Indigenous self-determination, will play a key role, providing mid- to long-term support for women and girls who have experienced violence and trauma.

And finally, all solutions for ensuring justice, safety and human dignity for Indigenous women, girls and Two Spirit people must include a deep and honest reckoning of the ways in which violence upon Indigenous peoples is interconnected with the violence done upon our lands.

Resources and more from Lush partners:

This is just one story in our five-part series. Read the rest of our Resistance and Resurgence stories now.

The opinions expressed in this article are those of the authors. They do not intend to reflect the opinions or views of the Indigenous community as a whole or of all Indigenous people in Canada or the United States.