Resistance and Resurgence is a five-part article series authored by or featuring Indigenous journalists, thought leaders and activists. In it, we’ll explore the key historical and present-day issues impacting Indigenous communities across Turtle Island, make connections between the past harms and the need for action now, and share stories of resiliency that have gone unrecognized by mass media since time immemorial.

The rich work of Isaac Murdoch has appeared on the frontlines of Indigenous-led fights: to stop the proposed Dakota Access Pipeline across the land of the Standing Rock Sioux, Enbridge’s Line 3 across Ojibwe territory, the TransMountain Pipeline which would cross unceded Secwepemc Territory, and other fossil fuel extraction projects. Creating protest art has been a key element of his activism to preserve, promote and elevate the rights of Indigenous people.

But that’s just some of where you’ll find Isaac’s inspiring work.

Since 2017, he’s been working alongside community on developing Nimkii Aazhibikong (pronounced Nim-key Ah-zh-ih-bih-coo-ng), a culture camp that’s being built by a community of youth, Elders and activists beside Ompa Lake, Northern Ontario in traditional Anishinaabe territory. The camp focuses on connecting young people with Elders for arts and cultural land-based teachings and allows the two groups to come together where they can connect to the land, each other and pass down the language and traditional knowledge to the next generations.

“This is a camp of resurgence,” says Isaac. “We want it to be for the environment, for the waters, and to start getting out on the land and occupying our traditional spaces. Our resurgence is the resistance.”

Most recently, Isaac has been working with Lush to create imagery for our Resistance and Resurgence article series, as well as artwork for wearable knot-wraps for Lush staff to observe Canada’s first National Day for Truth and Reconciliation in 2021. 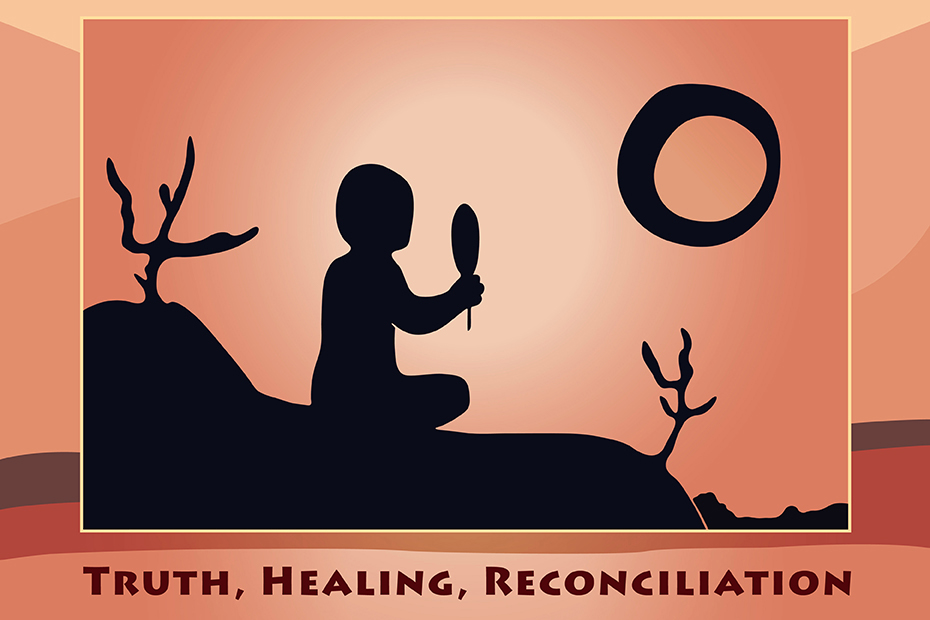 “Canada has a dark and chilling history when it comes to the environmental destruction of Indigenous lands and people. This did not happen overnight, but rather a strategic plan that was created by the Canadian government since its conception in 1867. During this narrative, I will unroll some events that led to the Indigenous genocide.”

In 1876, Canada addressed something called the "Indian Problem", by creating the Indian Act, legislation that was used to contain free-roaming Indigenous people who had their own land, governments, and sustainable economics. The policies forced Indigenous people into colonization to ensure they would never be a land-based people again. One of the horrific ways this was exercised was through residential schools.

It was often said by government officials that it was critical to "take the Indian from the child." This led to thousands of Indigenous children to be forced from their homes and into boarding schools to be reprogrammed so they would not be a land-based free people on the land ever again. This involved a complete attempt at eradicating our language, culture, writing systems, and ceremonial practices through legal processes.

Thousands and thousands of Indigenous children have been found buried at these schools. However, Indigenous people are still here and stronger than ever. The ongoing genocide for lands did not work. And now we are rising to save everything from massive, ecological collapse. We need everyone to join together in this movement for justice, freedom, and survival as we move forward in the 21st century.

It’s also time for Indigenous people to have land back. There is more than enough to go around.”

Isaac and three of his brothers were apprehended by Indian Agents, and his daughter Waabigwan is the first child in his blood line to have not been in 120 years.

He currently is fighting for justice and the dignity to have the truth told. Learn more about Isaac and his work.

The opinions expressed in this article are those of the author. They do not intend to reflect the opinions or views of the Indigenous community as a whole or of all Indigenous people in Canada or the United States.