Free ground shipping is back for all orders over $50! Shop now, pay later with AfterPay. Learn more.

Since 1995, Lush has been a trailblazer in the cosmetics industry. From inventing bath bombs and creating new, innovative products to fighting animal testing and ethical campaigning, it’s come a long way since its humble beginnings.

Before there was Lush, there was Constantine & Weir and Cosmetics To Go.

Mark Constantine and Liz Weir first met in the early ‘70s while working at a beauty salon in Poole, England. Mark was a trichologist and Liz was a beauty therapist. Both were interested in natural beauty products, so decided to create a business of their own.

The duo developed Constantine & Weir making products for local herbalists and salons, including The Body Shop. Later, with the help of Mo Constantine, Rowena Bird and Helen Ambrosen, they’d concoct small batches of products made from their own recipes. As The Body Shop gained popularity, owner Anita Roddick bought their bestselling formulas and parted ways, leaving Constantine & Weir free to start a new venture.

Free to run amok with creativity, the crew founded Cosmetics To Go, a mail-order company that offered never-before-seen items like bath bombs, solid shampoo bars, and massage bars. Mark and the team experimented and played with ingredients, innovated, and focused on issues like fighting against animal testing. They developed a strict buying policy that ensured that no supplier tested on animals and they funded work that highlighted alternatives to animal testing.

Unfortunately, after six short years, it all came to an abrupt end.

We believe that fresh ingredients deliver greater benefits for your skin and hair. 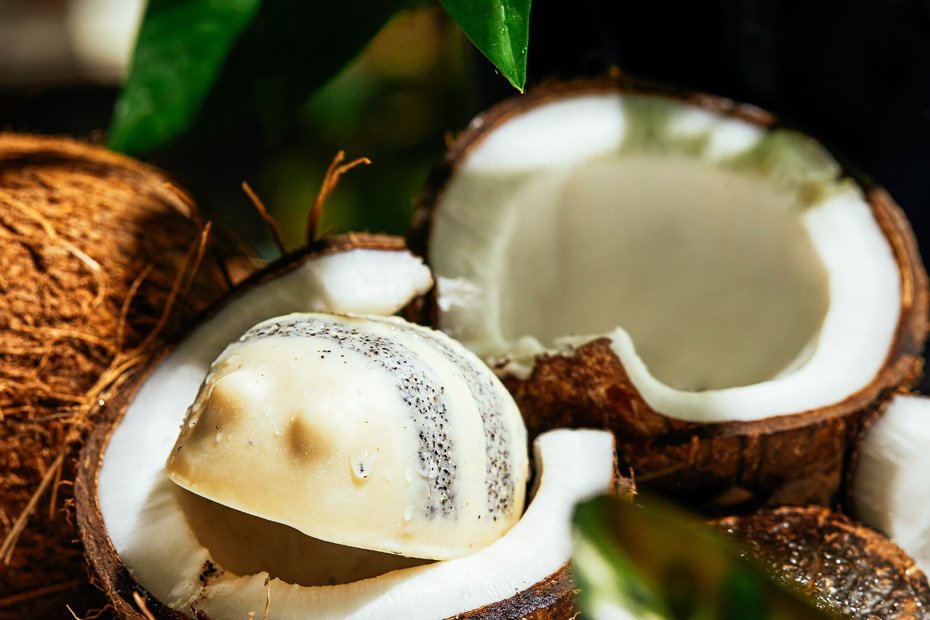 The arrival of Lush following the loss of Cosmetics To Go was a humble one, but many of the tenets and beliefs remained. In fact, a We Believe statement was created to guide this fresh start and remind the team where they’d come from, but also where they wanted to go.

The first Lush shop opened in Poole in 1995. Its simple design used reclaimed materials and was just one example of Lush’s values come to life: money was to be spent on things that brought value to customers, doing away with frivolous add-ons, like packaging. It also saw a more transparent ethical buying policy, where ingredient journeys could be traced from planting to harvesting and processing, ensuring that it was ethical from start to finish. Lush’s shelves were filled with iconic bath bombs, bubble bars, and massage bars that were zero waste and packed with even greater benefits to customers.

In 1995, on a trip to London, Mark Wolverton and Karen Delaney-Wolverton discovered Lush. They fell in love with its philosophy to bring fresh, vegetarian products to its customers. In 1996, they opened the first Lush shop in Vancouver, Canada. Today, there are 269 shops in North America all supported by head offices, factories, and distribution facilities in Vancouver and Toronto. Plus, there’s a real person behind every product made at Lush from making fresh batches to potting and labelling each one by hand.

With a massive global reach and platform, Lush has become synonymous with its values, allowing it to be a true campaigning company that brings ethical campaigns to the forefront: from breaking free from fossil fuels to supporting Black-led organizations and beyond. In 2007, Charity Pot also became a way for the brand to turn its resources into charitable giving to create positive change in the world. With every purchase of Charity Pot, 100% of its purchase price is donated to grassroots groups working in the areas of animal protection, human rights and environmental justice. Lush customers have bought more than 3.5 million pots since its launch, raising more than $50 million for thousands of projects around the world.

And it didn’t stop there; the team’s commitment to fighting animal testing continued, proving that there’s no need for these horrifying tests. In fact, the Lush Prize—an annual event that awards a £250000 global prize fund to those working to end or replace animal testing with revolutionary alternatives — helps to continue to support the end of animal testing once and for all.

Innovation also remains a core focus even today. Creating self-preserving (or preservative-free) versions of products that don’t need safe synthetics, sharing the power of zero-waste knot-wraps, adding more naked products, and finding new ways to create more vegan products. Even sourcing ingredients pushes the boundaries of what’s expected. In a quest for total transparency in its supply chains and an urgent need to address climate change, Lush began investing in regenerative farms, ensuring that as suppliers grow beautiful ingredients, more trees are put into the ground, more money goes back to farmers, and ingredients that are sourced offer 100% transparency. In fact, Lush has invested in farms in Peru, Guatemala, Arizona, and Uganda.

So what’s next? Lush’s journey is ongoing. And as it continues to grow and evolve in ways that keep breaking new ground in the cosmetics industry, it’s a journey we hope you’ll always be a part of.