Fighting for climate and environmental justice

Anthropocene Alliance (Aa) is a large coalition of frontline communities fighting for climate and environmental justice. Since 2017, this grassroots group has helped communities achieve justice for their homes and neighborhoods devastated by the impacts of flooding.

The climate crisis is a global concern, but its impacts are often local. In recent years, many parts of the U.S. have suffered devastating storms causing floods as a result of human-caused climate change. Cities in low-lying areas, such as New Orleans, New York and Miami, have massive management systems to attempt to mitigate impacts but, as we’ve seen, these systems can fail. Until global leaders address the root causes of the climate crisis, it’s up to the people most affected to find solutions.

Executive Director and Co-founder of Anthropocene Alliance (Aa), Harriet Festing, has more than two decades of experience working with flood-impacted communities. After a devastating flood in Illinois in 2013, Festing began working with a group of residents who advocated for a flood control project to ensure that the next time it rained, they would be safe. It’s part of what kickstarted Aa. “A group called Floodlothian Midlothian, started by a woman named Helen and her neighbors, was so powerful. They’d gotten $8.5 million invested in their community to stop flooding, they built a rain garden, changed stormwater ordinances, and helped influence state and federal legislation,” Harriet says. “I just thought ‘imagine if we could find more people like that’ and so that’s what we set out to do.”

Sophie, a multiple flood survivor, is a small but mighty protestor at the County Center Conway. 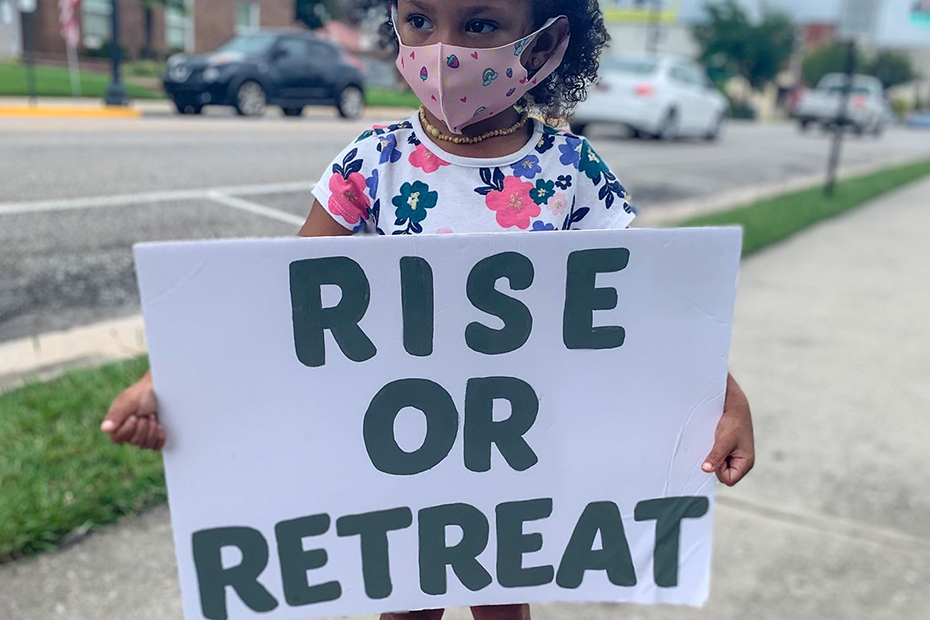 When floods devastate an area, frontline leaders and their communities face a myriad of challenges: damaged properties, homelessness, rising debt, unaffordable insurance, and emotional and physical distress. Aa has helped direct $14 million of investment to its members since 2018, and they match groups with experts like hydrologists, health advocates, engineers, planners, and lawyers to provide support to community leaders to halt developments in flood prone areas; plan and implement green infrastructure; organize home buyouts; and promote clean-ups at superfund sites, toxic landfills, and petrochemical plants in areas that flood.

Today, Aa has 69 members from 23 U.S. states plus Puerto Rico comprising more than a million people. Eighty percent are women, while 62 percent represent Black, Latinx, and Native American folks who’ve all been impacted by flooding due to infrastructure disrepair, development, or the impacts of climate change. Harriet explains, “They’re all extraordinary people who are helping find solutions to the challenges we all face.” Later this year, Aa will additionally focus on wildfires.

Power to the people

Charitable giving is at the heart of Lush’s business. We believe it's our responsibility to advocate for the environment, animals and people in need, as well as giving back to organizations locally and around the world through Charity Pot. We partner with groups like Anthropocene Alliance, because they play an essential role for frontline communities to help them organize support and relief from the impacts of the climate emergency. Learn more about the incredible work Anthropocene Alliance and its members are doing and please give them your support.

It’s time to demand change from our global leaders, because the climate can’t wait. Take action and demand President Biden end fossil fuel extraction now to help save our communities and the planet. Or, if you're in Canada, tell Prime Minister Trudeau to legislate the Just Transition Act.