How we grow together

Regenerative farming is a practice that leaves the land in a richer, more diverse and resilient state as a result of agriculture—rather than in spite of it.

Peru is one of the many countries where Lush is working with local farmers to reforest degraded land and grow ingredients used in Lush products. With these sustainable agroforestry farming projects, we have three main goals in mind:

In Peru, we’re growing three main crops that will be processed and used as ingredients in your favorite products, including rosewood oil, Brazil nut oil, and cupuaçu butter.

Roughly 1,100 square miles of Peru's forests are cut down every year—and 80 percent of this logging is done illegally. Forest loss hurts much more than the trees and wildlife; it also accounts for nearly half of the country's greenhouse gas emissions. Worldwide, deforestation and land degradation are the largest carbon dioxide sources, after the burning of fossil fuels.

Madre De Dios, a region of Peru that’s almost entirely covered by the Amazon rainforest, has suffered considerable deforestation due to illegal timber extraction and cattle ranching. Known for its rich biodiversity, several ingredients used in Lush products can only be found in this part of the world. Our vision was to grow these ingredients with complete transparency and recuperate the forest under an agroforestry system.

In early 2018, we established a 200-hectare farm where we grow diverse and native species, including rosewood and cupuaçu, in a way that imitates the natural regrowth of the forest. Over 40 percent of this growth is not used for products but rather simply to promote biodiversity. Lush Investments Coordinator Andrea Sabelli explains, “In the context of climate change, this work is incredibly important. Reforestation directly contributes to climate change mitigation by capturing carbon in the atmosphere and putting it back into the soil and the trees. By protecting large areas of rainforest, you’re ensuring that captured carbon remains where it is.”

In Peru, Lush is working with local farmers to reforest degraded land and grow ingredients used in our products. 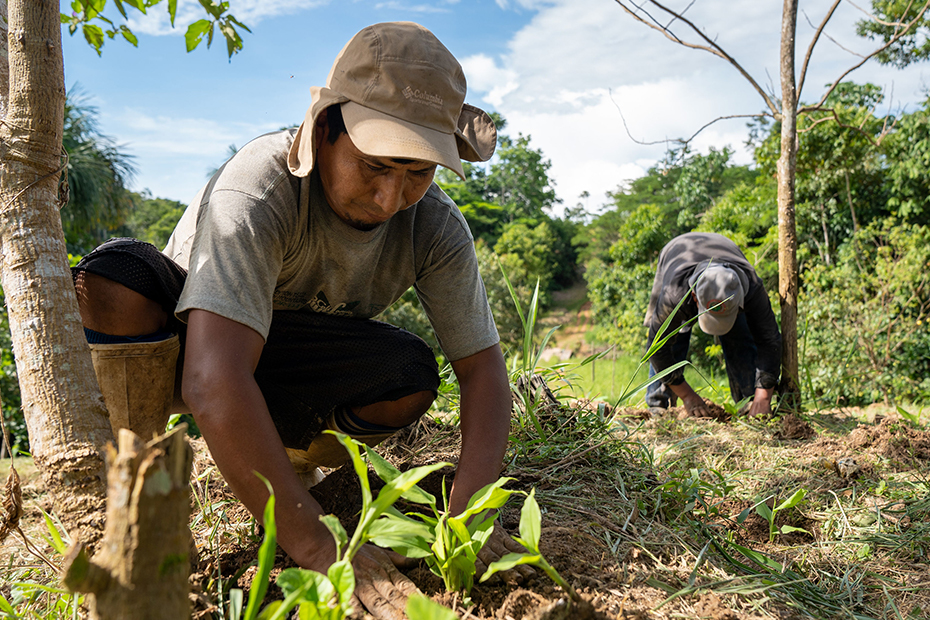 In establishing the farming project, it was clear that prioritizing rosewood was vital to returning the Amazon forest to its natural state. Uncontrolled logging and extraction in the ‘80s and ‘90s have pushed Peruvian rosewood to the brink of extinction. Rosewood oil, a spicy and sweet oil produced from the tree’s wood chippings, has long been a popular ingredient in the fine fragrance industry. Unfortunately, international demand has resulted in the exploitation of this important indigenous species.

We have planted more than 2,000 rosewood trees on the land and plan to add another 16,000 in the next several years. Here, we also hope to model a sustainable method for rosewood oil extraction; rosewood oil can be extracted from branches without uprooting or cutting down the tree. Our aim is to preserve and protect this species for generations to come and leverage market demand to support sustainable extraction.

In 2019, we expanded our efforts to protect critical Amazonian ecosystems when Lush acquired the lease on a 2,000-hectare area along the Las Piedras River in Madre De Dios. On loan to Lush from the Peruvian government, the land concession had been heavily logged and was vulnerable to further deforestation of endangered species such as mahogany and ironwood. Here, we’re working with a network of like-minded organizations to prevent illegal resource extraction and protect a vital biological corridor for a wide range of large cats, primates, birds and reptiles before it’s too late.

“Madre de Dios is known in Peru as the capital of biodiversity,” explains Forestry Agent Julio Magon. “This is the source of three basins of the Amazon river and is home to countless wild species.” Magon, who works in partnership with Lush to ensure our management of the concession is aligned with local policies and laws, warns, “The pressure is growing. If illegal extraction carries on at this rate, the region will lose this status.”

Our concession is closely monitored 24 hours a day with the help of Jungle Keepers, whose rangers protect the forest from illegal logging activity. They also track and monitor fauna, including jaguars, pumas and ocelots, to ensure they remain undisturbed in their natural habitat.

We also sustainably harvest Brazil nuts from more than 630 trees for processing into oil, which can provide up to 80-90 percent of Lush’s annual brazil nut oil usage depending on annual production. Towering giants of the forest, Brazil nut trees are a keystone ecological species in the Peruvian Amazon. Their coconut-sized nuts fall more than 164 feet (50 metres) to the forest floor between January and March each year. The nuts are collected by hand before being dried, processed and pressed into a rich, golden oil.

We recently began processing the first batches of cupuaçu butter and Brazil nut oil on the farm using solar energy. These ingredients will make their way into Lush products in the coming months providing end-to-end transparency for Lush and our customers. As for the future, Sabelli hopes our projects in Peru will inspire others to follow suit. “We’re showing what’s possible. Rather than cutting down forest to grow or extract resources, you can have an agroforestry system and still earn a viable income.”