Free ground shipping is back for all orders over $50! | Shop now, pay later with Afterpay Learn More.

Indigenous peoples are leading the way for climate justice

Indigenous peoples are leading the way for Climate Justice and the Rights of Nature.

This is a guest-authored piece written by Movement Rights—an amazing group working for climate justice, the rights of Indigenous peoples and nature.

In the fight against the worst environmental harms including fossil fuel pipelines and fracking, Indigenous people have often put their bodies on the line, not only to protect their people and land—but for everyone living "downstream". Indigenous cosmology holds the Earth as a sacred, interdependent life-giving system. As humans, we thrive because we're in a relationship with everything else in the system of life; there is no separation between us and the water we drink or the sun that warms us. Yet the modern world acts as if humans are removed from nature or owners of nature. A world without a living knowledge of its spiritual relationship and responsibilities to the creative principles of the natural laws of Mother Earth results in our planet become property, without a soul, to be owned and sold. Human law almost everywhere defines nature as property to be owned, commodified and destroyed at will for profit. Most of the destruction of the Earth is legal, including fossil fuel pipelines and fracking.

The growing worldwide movement for Rights of Nature—now law in 10 countries—recognizes the rights of ecosystems to "exist, thrive and evolve its natural cycles". Globally, Rights of Nature is often led by Indigenous peoples whose cosmology is rooted in the idea of reciprocity with the Earth and living in balance with the Earth's offerings. But in the US, for the last decade, Rights of Nature has been led by white lawyers in primarily white communities as a legal tool—too often without the cultural shift that recognizes we must live in balance with the Earth. With help from Movement Rights, that began to change in 2017 when the Ponca Nation of Oklahoma made history as the first tribe in the US to recognize Rights of Nature on their territory to confront fracking and other fossil fuel activities. Following the Ponca, several other tribes across the US have also recognized Rights of Nature as law consistent with their Indigenous values and traditions and as a way to protect clean water, air and soil—not only for their tribes but for everyone.

After being forcibly removed from their original homelands as part of President Andrew Jackson's Indian Removal Project, the Ponca walked the Trail of Tears, many settling in an area of what would eventually become the state of Oklahoma. Thousands of those on the Trail of Tears died along the way. Among those who survived were Casey Camp Horinek's ancestors. Encroaching settlers founded Ponca City around their new tribal territory and now it's a fossil fuel epicenter. Today, says Casey, "Our people have become the victims of environmental genocide. We have a funeral a week from fossil fuel cancers, respiratory issues and related illnesses. We're already being fracked to death and now they want to add an extension of the KXL pipeline through tribal lands and rivers."

Ponca City is now the man-made earthquake capital of the world, owing to fracking and injection wells which pump toxic fracking waste deep underground, causing hundreds of earthquakes each year. Fracking pump jacks, oil refinery smoke, petrochemical plants and oil bubbling up from the ground are everywhere you look on the south end of Ponca City—where tribal members live. Ponca tribal wells are too toxic to drink, bathe in or allow pets and livestock to drink; they now must buy their water. The land is so polluted, you cannot grow certified organic food within 16 miles of tribal land.

Many considered the Ponca tribal land "too far gone" and a "sacrifice zone" for fossil fuels. But the Ponca saw they had an opportunity to stand for the Earth and begin to change the rules for future generations and recognize the Rights of Nature in keeping with their traditional ways. "We all know that water is life. It will take all of us humans because we're speaking for those without voices, for the deer, the cattle and those that fly. And it's time to take a stand for our people and defend the Earth." 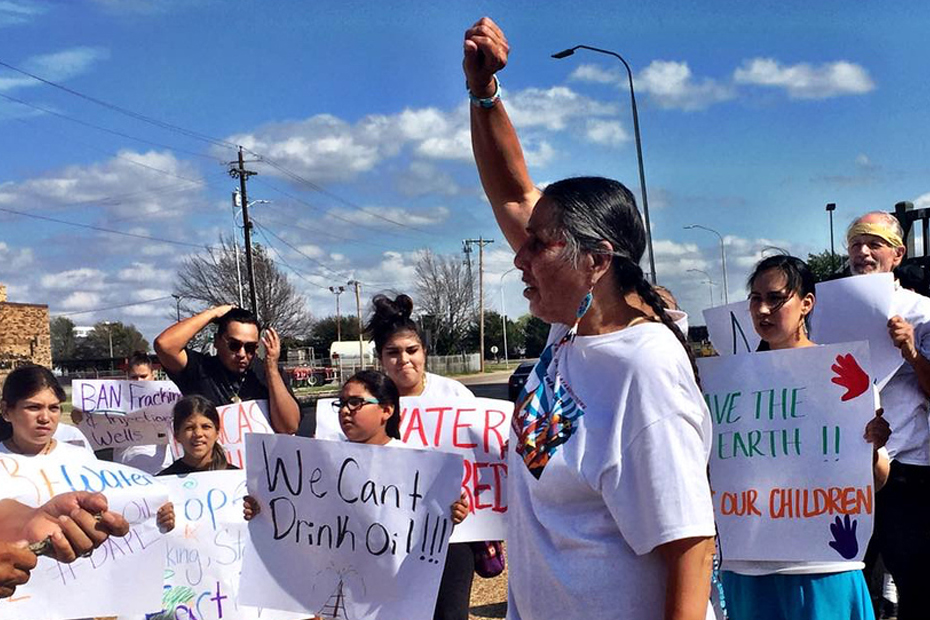 Is Indigenous-led Rights of Nature the Civil Rights struggle for the environment?

Beginning in 2015, Movement Rights made a long-term commitment to support the Ponca Nation's long-term vision for not only passing Rights of Nature in their territory but helping to open the door for other Tribes to see the Rights of Nature as a way to bring Indigenous Cosmology into a western legal framework for the first time and to enhance tribal sovereignty over the wellbeing of their ecosystems. Casey was on the Ponca Tribal Business Council when the Rights of Nature—and the rights of climate to be free from fossil fuel harm—was passed into law.

Now serving as tribal Environmental Ambassador and director of Movement Rights Ponca Rights of Nature campaign, Casey leads our work with many other Oklahoma tribes to recognize the Rights of the Salt Fork River to protect it from fossil fuel activities. We're also working with tribes and Indigenous attorneys across the US to recognize Rights of Nature to stop pipelines, including the KXL pipeline expansion and beyond. Until we address the issue of tribal sovereignty, the US will continue to harm tribal ecosystems and erode tribal sovereignty. Changes in policy and law can establish permanent protections. Rights of Nature can assist US tribes in asserting sovereignty. Like the struggle for civil rights, it has the power to shift culture and law and offer new environmental protections.

The leadership of the Ponca Tribe of Oklahoma has been an important piece of opening the door for this work among other tribes and communities and many tribal leaders reach out to Casey and the Ponca Business Council for their own work. To protect local environments, we must challenge the idea that ecosystems are only property. Recognizing Rights of Nature is not an end to business or profit. Instead, human activities/development must not interfere with the ability of ecosystems to absorb their impacts and regenerate their natural capacities. It also means the end of "sacrifice zones"—the areas given over to the most hazardous activities nearly always sited where low-income BIPOC people live.

To learn more about Movement Rights and how you can support their work, visit their website. You can also support other community-based groups like Movement Rights by purchasing our Charity Pot Body Lotion. 100 percent of the purchase price (minus taxes) goes directly to small, grassroots organizations around the world.