The Black Alliance for Just Immigration

As part of our commitment to this moment in the Black Lives Matter movement, Lush is partnering with 12 organizations at the center of the movement to support and uplift the immediate responses for activists, messaging and direct action. We’re also supporting organizations working in the medium- and long-term to end police brutality and systemic racism.

These organizations build community alternatives to end harm and violence, empower Black people to exercise the right to vote, protect and defend the health and human rights of Black trans people and ensure that Black-youth activists and organizers have a voice.

BAJI’s flagship project is the Black Immigration Network (BIN), a national alliance that brings together Black-led organizations and programs to advance just immigration policies and promote cultural shifts our communities need. The BIN kinship provides a safe, communal space for diverse black communities to connect, engage and advocate for equality and justice for all.

We spoke with The Black Alliance for Just Immigration (digitally) and asked them to provide more information about who they are, what they do and why their work is so important. The following comes directly from BAJI:

BAJI was founded in Oakland, California in 2006 by veteran civil rights activists and clergy that were concerned about a wave of unjust immigration enforcement laws that were gaining popularity nationwide. BAJI also grew out of the efforts of the Priority Africa Network. PAN organizes Africa Diaspora Dialogues which have brought African Americans and Black immigrants from Africa, the Caribbean and Latin America together to dialogue about the associated myths and stereotypes. They also discuss the cultural, social and political issues that divide our communities. Currently BAJI has offices in Oakland, Los Angeles, New York, Atlanta, Washington, DC and Miami, along with members nationwide. 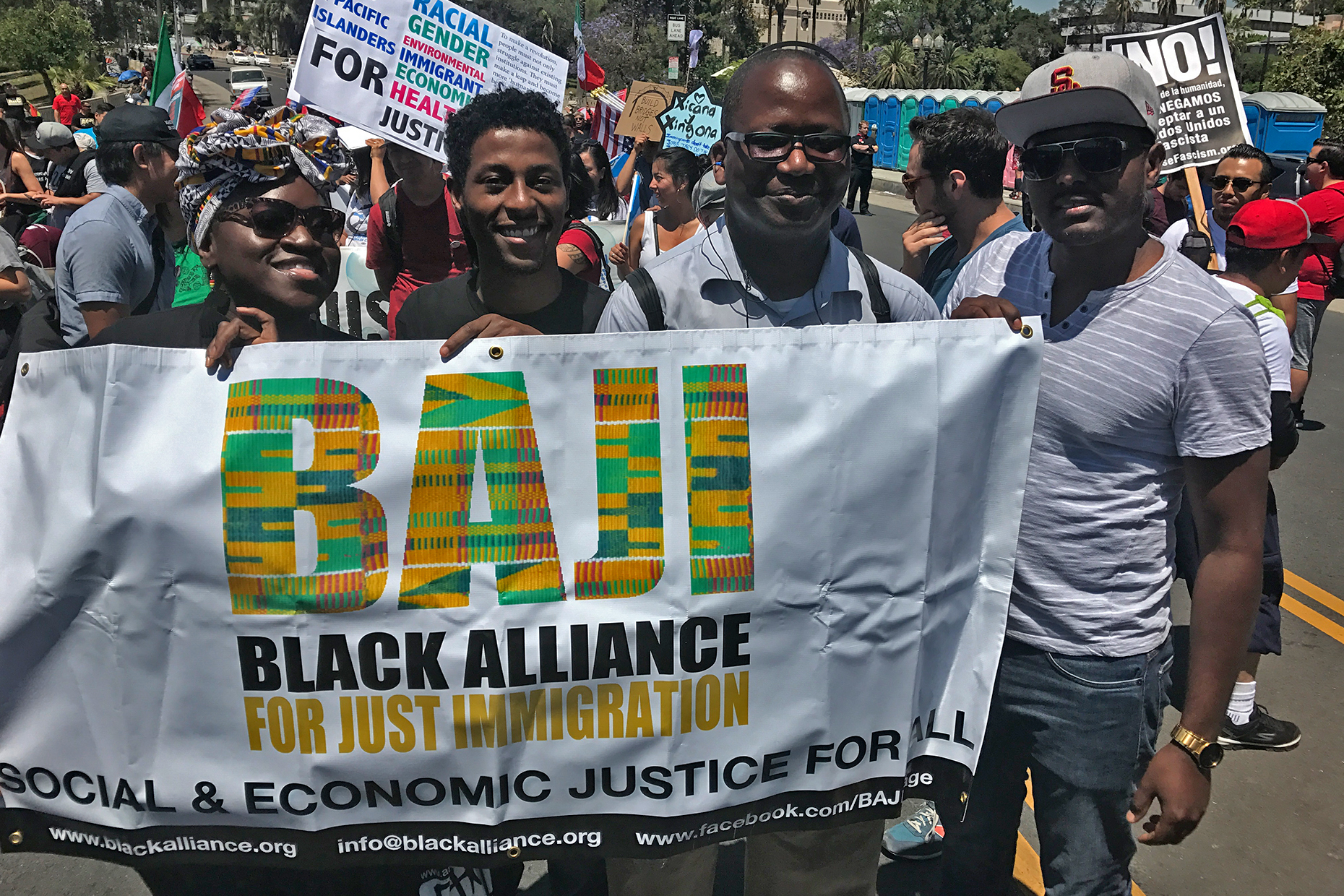 Black immigrants and African Americans face extreme marginalization in the US. With the highest unemployment and poverty rates for any race in this country, as well as rampant criminalization that leaves both groups comprising 40 percent of the incarcerated population, Black communities are in need of critical resources. In the immigrant rights landscape, as the discourse and opportunities to uplift a fair and just immigration system emerge, Black voices are continually left out—leaving inclusive racial justice opportunities out of the equation.

Efforts to address challenges facing immigrant communities in progressive states such as New York and California have resulted in some of the most progressive policies in the country. This includes the legislation providing healthcare for undocumented immigrants and children; drivers’ licenses and municipal ID cards; dismantling collaboration programs between Immigration and Customs Enforcement (ICE) and police as well as the decriminalization of certain criminal offenses. Still, Black immigrants have yet to fully reap the benefits of these victories. African, Caribbean and Afro-Latino immigrants have reported challenges to obtaining state drivers’ licenses and municipal ID cards.

Thousands of Black immigrants face detention or deportation yearly. Many more have their applications for legal status—such as a green card, work authorization or citizenship—rejected. And culturally sensitive immigrant support services are lacking. This is evinced by the lack of resources and institutional competence to meet the basic needs. In addition, Black immigrants face unique barriers and suffer dramatic disparities when it comes to economic and health outcomes. Black immigrants have the highest unemployment rates amongst all immigrant groups. Black immigrants are less likely to have health insurance and access to medical services. This is partially due to fear of discrimination as a result of their racial, immigration or socio-economic status.

The Black Alliance for Just Immigration develops culturally competent resources and methods of engaging Black immigrants to ensure that immigrants are protected from harsh immigration enforcement policies and that they benefit from progressive gains. BAJI also seeks to build the capacity of Black immigrant-serving organizations to meet the needs of communities and work to reduce negative outcomes in the criminal justice and immigration systems that place barriers on individual, family and community health.

An inclusive, fair and just immigration system must prioritize and engage the most marginalized voices in creating healthy, safe communities and a social safety net for all Black people—especially Black immigrants.

Learn more about The Black Alliance for Just Immigration, get involved and donate at their website.

All photos used with permission BAJI.