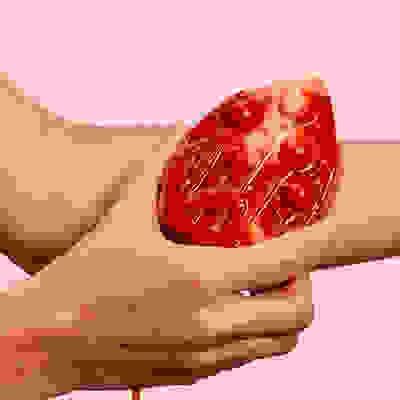 Spellbinding relaxation
3.6 out of 5 Customer Rating
33 Reviews
Item No. 08241
Vegan
Self Preserving
Naked
Add Poppy to Wishlist
Fall under the magic spell of Poppy. But, unlike a certain girl wearing ruby slippers, you won't fall asleep. Instead, let the poppy seeds gently exfoliate your skin, while fair trade organic cocoa butter and extra virgin coconut oil work together to leave skin feeling silky smooth. Take a moment to breathe in the sweet blend of bergamot and blackcurrant that'll stay with you long after you've left the shower.
One bar of soap equals one 500ml bottle of the liquid stuff. 1.4 billion bottles of liquid soap are used yearly. Not all are recyclable or recycled. Go plastic-free.
See how to use
Poppy
Ingredients How to Use
Ship to home
Keep me updated

Lather up and let the poppy seeds gently smooth out the rough stuff. Soak in the sweet smell and rinse off.

The production of palm oil products have terrible environmental and social effects. So, in 2008, we decided to remove palm oil from our soap base. We're on a journey to become 100% palm-oil free, find out why.

Discover the problem with palm oil.

It's gone before you know it.

Smells pretty good, it's sweet. I would buy it in a shower gel form if they made it. The issue is that it melts really quick even if you keep it out of the water or store it away from the bathroom. Which sucks bc it's expensive. The second issue is that the poppy seeds are rough on your body even if you are gentle. There are too many poppy seed on it.

I hesitated to buy this because usually anything exfoliating is hard on my sensitive skin but I didn't find the poppy seeds irritated me at all. The scent of it is the most fantastic thing ever! I smell it every time I walk by and it's such a beautiful looking soap. It is on the soft side so all you have to do is leave it out for a week or so and it will harden up and last longer. So sad It's been discontinued along with a bunch of other really great items.
Yes, I would recommend to a friend

Smells great but melts much too fast

Only got 2 maybe three uses out of bar

I like the scent but it's too subtle and almost unscented. The poppy seeds are nice for exfoliating but definitely a little rough for sensitive skin. Decent lather.

So I know that different soaps have a different lifespan. So far L'Coccitane has the longest that I know of I have a bar of soap that I have been using daily to shower and it has lasted me 2 months so far, I think it may last over 3 months. Anyway I stopped using it on Saturday because I bought this guy and it smells great, but I don't think it will last more than 2 weeks. At first I found the poppy seeds to be a bit harsh on my skin, but definitely have gotten used to it and even started to appreciate it after day 3. Will I buy again? Probably lol Just because I love stuff. lol
Yes, I would recommend to a friend

Love lush soaps because of how long they last but disappointed with this one ONLY because it only lasted a little over a week.. :( Other than that, it is a GREAT soap, it smells really nice, and the poppy seeds inside feel the soap great on my skin! I felt super moisturized and refreshed after using, so maybe a soap you'd want to cut up.

A nice experiment I suppose

Doesn't smell like black currant and bergamont. It smells like bubblegum and turkish delight. Doesn't last very long, used it 4 times and it is now half the size it was. Someone mentioned curing the soap, I've also noticed that since Lush switched away from palm oil their soaps haven't been fully cured, maybe their new oil base needs to cure longer and that hasn't been taken into account yet. The only thing that hasn't disappointed me about this soap is the poppy seeds. They are nice and scrubby.

This soap is my favorite. It is SO creamy and it feels like it hydrates your skin amazingly. When you add the poppy seeds, it's just the best product to keep your skin healthy and glowing. The smell is so great, like sweet creamy strawberries. I use it all seasons, but even more during winter since my skin gets a bit dry. The only downside is, as a lot of people already said, it melts fast. In less than 2 weeks your soap will be gone. The best tip I can give you is to not use it right away when you buy it...It's not always 100% dry like the other products because of the ingredients. I usually keep it a month in my drawer before using it. Then after each use, I dry it out. I can keep my soap at least 3 weeks when I do all this.
Yes, I would recommend to a friend

I decided to try it even with the low ratings..

Maybe I should have listen to the lowest raitings. It does scratches my skin, it doesn't smells as I would like it to, and looks nothing like the pictures here. I do enjoy the lighter parts (more moisturizing and less exfoliating).
Displaying Reviews Back to Top
« Previous | Next »
My Pick-Up Store
Show all stores
Why subscribe?